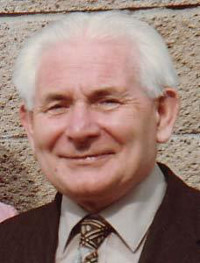 A.M. Salway (Arthur) Gooding (1915 - 1999)
A.M.S. Gooding was born on the 5th January 1915 in Suffolk, East Anglia, England. He was saved in 1929 at the age of fourteen, baptised and received into assembly fellowship. At the age of sixteen he was exercised to present his life to the Lord in service as exhorted in Romans 12:1. For the following 68 years, his life witnessed to his obedience to, and study of, the Holy Scriptures.

He first spoke at a conference when only 18 years of age and he preached and taught locally. He moved to Kilmarnock, Scotland in 1941 to take up employment at John Ritchie Ltd., where he spent the next 33 years of his life, progressing from being a print room compositor to being appointed managing director. He was also a trustee of the Lord's Work trust.

As to literary works, he assisted in the preparation of the Believers Magazine, took over from William Bunting as the editor of the magazine Assembly Testimony and wrote a number of books such as the "Epistles to John" (in the "What the Bible Teaches" series) and "The 13 Judges".

He also served as a godly overseer at Elim Hall, Kilmarnock for many years. He had a number of series of Gospel meetings with Jack Hunter during this period and many of the souls saved at that time remain in assembly fellowship today – a testimony to the reality of his work for the Lord.

Arthur Gooding will be best remembered for his clear and powerful teaching of the Scriptures. For many years while in secular employment, he travelled throughout the UK in his ministry. He was acquainted with the whole spectrum of divine truth and provided varied ministry to the people of God. His was not a one-stringed harp. As well as the many series of ministry meetings which he took, A.M.S. Gooding also conducted many Bible Readings in places such as Lurgan and Larne (N.Ireland), Eastbourne (S.England) and Kilravock Castle (N.Scotland).