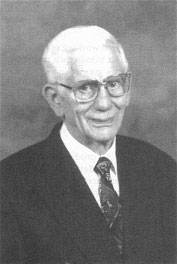 Albert McShane (1914 - 2002)
Albert McShane was born on the 22nd day of September, 1914 in the village of Kilmore, near Lurgan in Northern Ireland into a family of three. He joined the Sunday School when he was three years of age. He later attributed his salvation to the foundations laid in this Sunday School. He was impressed with his need of salvation at an early age when a member of the Sunday School died and was not present to receive his prize. This need was further impressed upon him when his nine year old elder brother died.

He attended two series of meetings prior to getting saved; the first conducted by Messrs. McGowan and Bailie; the second by Mr F. Knox. Although Albert longed to be saved, he was not saved during those meetings. On 3rd January 1929, his mother asked him to attend the Bible Reading in the assembly with her. As it was the first week in 1929, the brethren decided to change it into a prayer meeting. This prayer meeting awakened him to the serious need of being saved. That night, he considered the verse "He that believeth on the Son hath everlasting life" and simply believed on the Lord Jesus Christ.

He was baptised and received into fellowship in the Kilmore assembly when he was 14 years of age. He joined William McCracken in 1944 in a series of Gospel meetings. After preaching the gospel for a number of years, he left his employment and served the Lord by preaching and teaching for over fifty years. He preached with Mr William McCracken at first, then Mr Alec Lyttle and latterly with Norman Turkington and David Gilliland.

Although he loved the gospel and often stressed the need for assemblies to be actively engaged in it, he is remembered as a greatly gifted Bible teacher. His ability to take up passages rarely ministered on and passages often classified as "difficult" and break these down into simple terms easily understood by all, was a measure of his quality as an expositor. As well as the many ministry meetings he took, he led many Bible Readings and was responsible for opening the Bible Reading at Lurgan on Saturday nights for over fifty three years. In addition, he led the Bible Readings in many of the large conferences in Northern Ireland (Lurgan, Craigyhill, Larne, Belfast Christmas Conference) and abroad.

He preached in a number of different countries and authored numerous books. Many have been blessed through reading his commentaries on books of both Old and New Testaments. He wrote the commentaries on II Corinthians, Philemon and Jude for the Series "What the Bible Teaches" as well as a very practical exposition of the Epistle of James. He also wrote a large number of topical articles in assembly magazines.