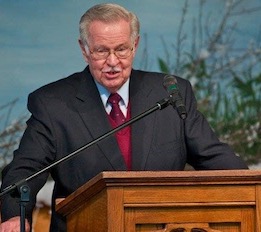 Tom Wilson was born in Angola, the son of pioneer missionaries, T. Ernest and Elizabeth Wilson. Tom was an electrician by trade and was always active in his local assembly. In 1966 the family left Zambia for the USA. In 1971, Tom and Ruth Wilson were commended to the Lord’s work in Zimbabwe and served there for many years. His primary ministries were Bible teaching, discipleship and leadership development in the Ndebele-speaking assembly.

They returned to the US in the 1980s to care for his aging parents and began a teaching ministry mostly in the mid-Atlantic states but further afield as well. He was privileged to teach in Africa, Australia and Ireland in later years. In 2013, he was diagnosed with an aggressive cancer and went home to be with the Lord in early 2014.

His life verse was Acts 20:24, “…Nor do I count my life dear to myself, so that I may finish my race with joy, and the ministry which I received from the Lord Jesus, to testify to the gospel of the grace of God.”